“They’re under our sinks, all over our streets, and filling the stomachs of dead whales. Plastics kill an estimated 100,000 marine mammals and a million seabirds every year, and once the bodies decompose the plastic persists to be eaten by yet more animals.”

A huge part of this plastic pollution comes from plastic bags, 100 billion of which are used annually by Americans and only 1 percent of which are returned for recycling. This alarming information motivated the Climate Action Group of the Unitarian Universalist Congregation of Fairfax (UUCF) to organize a recycling project which succeeded in recycling 752 pounds of plastic films.

The project started with a tour of the American Disposal Recycling Center in Manassas last year. The tour was in conjunction with Plastic Free Fairfax which is a campaign to end single use plastics. On the tour we learned that plastic bags can’t be recycled in Fairfax County and they do harm to recycling plants. Instead of throwing them out, we learned of a company, Trex, that collects plastic films and turns them into decking material and outdoor furniture.  Through a call to Trex we discovered that they offer recycling challenges for schools, universities and other groups. For civic and faith-based groups, the challenge offers an outdoor bench in return for collecting 500 pounds of low and high-density polyethylene films within a six month period. 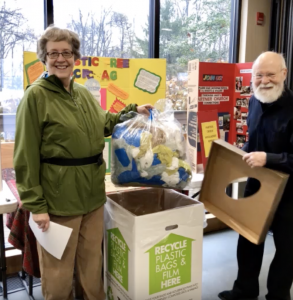 To accomplish this daunting task, we joined with Unity of Fairfax, 350Fairfax, Woodburn Homes Civic Association, and the Unitarian Universalist Church of Reston.  We picked up the collections from each of our partners on a weekly basis, weighed, recorded our haul, and, by pre-arrangement, delivered the plastics to the Oakton Giant Food who then took them to a distribution center where they were baled and trucked to Trex in Winchester. 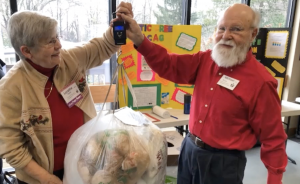 Upon completion of this project, we were awarded an attractive outdoor bench which we in turn donated to Luther Jackson Intermediate School with a plaque saying, “More than 40,000 bags were recycled to earn this bench. Join the effort to  protect our one common home, the Earth.” And, our campaign was capped with a tour of the Trex Facility which was a most impressive example of a green operation!

While the volume of plastic collected, the equivalent of over 60,000 bags by the end of our project, was a significant accomplishment, another major achievement was education.  Many participants indicated they were aware that grocery stores and some retailers collected plastic bags, but most did not know the extent of the collectible materials. We learned about the many plastic films that can be  recycled such as bread and ziplock bags, cereal box liners and bubble wrap, significantly increasing our donations to the recycling bins. Also, it seemed that the satisfaction from participating in a constructive group effort engaged folks in becoming more involved in environmental activities.  It was such a success, that UUCF is going to repeat the effort in 2020. Also, we are developing a tool kit, which should be available by the end of the year, for other congregations to use in starting up Trex recycling projects. In the meantime, we’d be happy to answer questions. Our hope is that, until we achieve a plastic free Fairfax, keeping these plastic films out of our oceans and streams, will lessen their impact on our precious planet Earth! 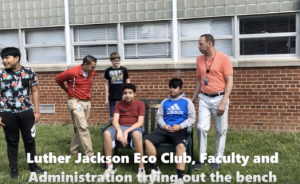 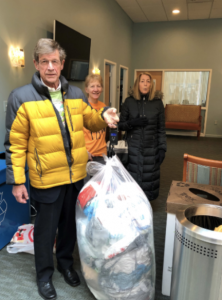